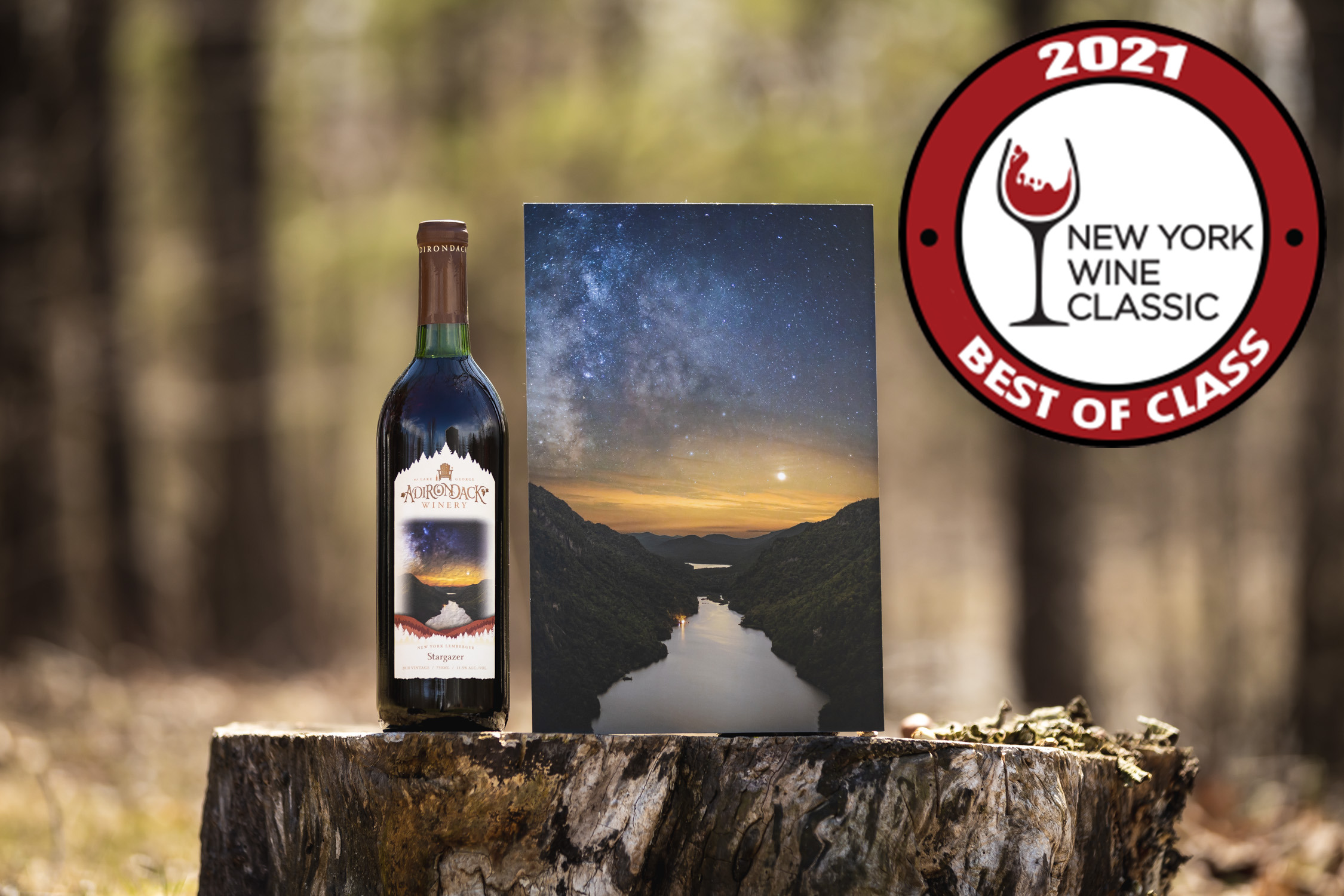 Congratulations to Adirondack Winery for taking home a “Best of Class” award at New York Wine Classic for their “Stargazer” wine!

Stargazer is one of Adirondacks Winery’s relatively new wines — released as a limited-edition dry red with only 279 cases. (Did you know they have more than 30 fruit-infused and traditional varietal New York wines?!)

Read their press release below to learn more about this delicious wine with oak and clove notes.

Adirondack Winery is pleased to announce its “Stargazer” red wine has been awarded the prestigious “Best of Class” designation at the 35th Annual New York Wine Classic.

Known as the “Oscars of New York wine competitions,” this acclaimed event announced its winners on Wednesday and presented Stargazer with first place in the Lemberger / Blaufrankisch category.

Stargazer is a relatively new offering in Adirondack Winery’s lineup of more than 30 fruit-infused and traditional varietal New York wines. It was first released in April 2020 as a limited-edition dry red wine (only 279 cases produced). Since then, it has become one of Adirondack Winery’s most desired red wines, known for its enticing oak and clove notes on the nose, flavors of dark black currants and a touch of pepper spice, with a tannic, earthy finish. It’s a versatile red wine that pairs well with BBQ, pizza, smoked cheeses, chocolate desserts and more! It is best served at 55 to 62 degrees Fahrenheit.

It is made with a dark-skinned grape varietal known as Lemberger (synonymous with the German word, Blaufrankisch) and it was aged for 15 months in American medium toasted oak barrels.

“Winning an award like this is always special, but even more so when you get it right on the first try,” said Adirondack Winery’s Associate Winemaker Brad Casacci. “Being our first time working with the Lemberger grape, we really had to do our homework on the best way to approach this wine. It is a relief to know our hard work paid off with not only an exceptional wine, but also the recognition that now goes with it.”

Adirondack Winery sourced its grapes for “Stargazer” from a vineyard located on the east side of Seneca Lake in the hamlet of Caywood, New York. Referred to as the “banana belt,” the location of the vineyard has a slightly warmer microclimate compared to other vineyards in the area.

“When these grapes were harvested in October 2018, we were well aware of their high quality,” Casacci said. “While it is always a challenge when it’s your first time working with a specific grape, our goal was to use light amounts of intervention so these grapes could shine and express their true brilliance.

Combined with 15 months of aging in a hand-picked selection of American oak barrels, I believe we accomplished a well-balanced wine that combines moderate oak influence with pleasant acidity and rich and peppery black fruit flavors,” Casacci added.

“Customer response to this unique wine was excellent, so we have also decided to feature it in a different way. This summer, we will be releasing “Moonlight”, a dry rosé version of Lemberger, created by removing the skins from the grapes before pressing,” said Sasha Pardy, Co-Owner & President. “Moonlight” will be a small, limited-release wine that will first be made available to club members.

In its 35th year, the New York Wine Classic is organized by the New York Wine & Grape Foundation, an organization dedicated to promoting the quality and diversity of New York’s wine and grape industries. A total of 607 entries were received from 96 wineries across the state. The wines were judged by the NYWGF and for the first time, a panel of beverage directors, sommeliers, top bartenders, retail buyers and educators from the Beverage Testing Institute.

On March 18th, the New York Wine Classic will announce its “Best of Category” winners, as well as the winners of the “Governor’s Cup” and Winery of the Year awards. The announcements will be made in a Zoom meeting that can be accessed through the NYWGF Facebook page.

Adirondack Winery has deep roots in the Lake George region, and proudly displays iconic images of the Adirondacks on its wine bottle labels. These images connect its customers to an area many of them know and love, and “Stargazer” is no different. The “Stargazer” label features a photograph of a starry night sky over Ausable Lake in the Keene Valley, taken by local photographer Alex Kelly.

Adirondack Winery has been improving its winemaking process year after year, with state-of-the-art tanks, bottling lines, and grape harvesting machinery added every year. They plan to break ground this spring on a brand-new winemaking facility at their Queensbury headquarters that will allow the company to triple their wine production and offer a one-of-a-kind wine tasting experience in the Queensbury area.

Adirondack Winery’s “Stargazer” is available for purchase on its website at adkwinery.com, at its Lake George Tasting Room (285 Canada St. Lake George, N.Y.) and its Queensbury Headquarters & Winemaking Facility (395 Big Bay Road, Queensbury, N.Y.). It is also available for purchase at its Bolton Landing Tasting Room (4971 Lake Shore Drive, Bolton Landing), which is open seasonally, from April to November.