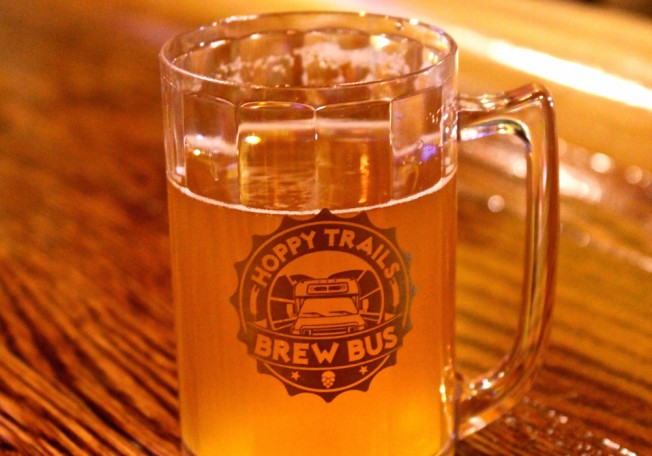 With the rise of craft breweries in New York, picking which ones to visit is a really tough process. When we heard about the Hoppy Trails Brew Bus in the Glens Falls area (think a Finger Lakes wine tour on steroids), we were excited to learn more about what the tour had to offer.  The concept is simple: Hoppy Trails founders Gabe and Olivia Sutton completely revamped a small bus that they use to tour beer enthusiasts around the Glens Falls/Lake George area, stopping at 3 or 4 breweries along the way (or even distilleries and wineries depending on the tour you choose).  Time spent on the bus is filled with stories from your tour guide – historical and fun – and time spent at the breweries is filled with tastings and brewery process tours.  The bus in and of itself is a piece of art – including plush and comfortable seats, an awesome chalkboard that lays out the day’s tour, a local craft brewery map painted on the ceiling, and plenty of room for stashing bags and growlers.

On our PureADK Hoppy Trails tour, we stopped at four locations: Adirondack Brewery, Springbrook Hollow Farm Distillery, Common Roots Brewery, and Argyle Brewery.  Each location was unique in its own right and we learned something new with every tour.

The Adirondack Brewery is an award-winning brewery located in the town of Lake George.  With over 25 all-natural, non-pasteurized craft ales each brewed and bottled on premise, the Adirondack Brewery houses both a brewing facility and a pub that offers brews and delicious food.  Upon arriving to the Adirondack Brewery, John Carr, the man behind the brews, gave us some unique insight into the brewing process and what separates the Adirondack Brewery from other breweries in New York State.  Determined to source as much of the material required for brewing, bottling, and packaging from local businesses and farmers, John utilizes New York products throughout the process.  While on the tour, we got to taste the new brew on tap for the summer – Tangerine Summer Dream – and it was awesome.

Our next stop was the grand opening of the Springbrook Hollow Farm Distillery, nestled within the Foothills of the Adirondack Mountains.  Located in a pastoral 200-acre setting, the distillery is housed in a renovated horse barn, chock full of beautiful timber and glistening copper stills.  We arrived at Springbrook Hollow and were treated to guitar music, specialty cocktail bars, sunshine, and a behind-the-scenes tour of the operation.  Like the Adirondack Brewery, the distillery is sourcing much of their material locally; using 75% NY State grains and growing their own fruits, which are infused in the products.  From vodka to gin to limoncello, the small batch spirits are full-bodied and delicious.  It was a pleasant visit – sitting in the grass in front of the barn and sipping on a muddled cucumber and gin concoction – and it took some convincing by Olivia that it was time to move on to our next brewery.

Heading back into Glens Falls, our next stop was at the Common Roots Brewery, a microbrewery whose taproom doors opened for the first time in December 2014.  Bert and Christian Weber, a father and son duo, wanted to honor their family’s roots, mixing “old world traditions with new world inspirations” to create some unique and delicious craft beers.  Christian is the head brewer, beginning humbly back in 2005 and taking on an apprenticeship at a brewery during grad school.  With Bert’s creative vision, he brought the warm and inviting atmosphere of the Common Roots beer garden and taproom to life.  Before arriving to Common Roots, Olivia handed out some custom Hoppy Trails tasting glasses that we put to use in the taproom – they also make a great souvenir!

Our last stop for the day was theArgyle Brewery, in Greenwich.  Owners Matt and Chris have a strong connection to the town of Argyle, the namesake of the brewery.  Argyle is one of the few remaining “dry towns” left in New York, so when brewers Matt and Chris decided they wanted to take their hobby to the next level, they had to set up shop in neighboring Greenwich.  As the first New York Farm Brewery in Washington County, Argyle Brewing Company hopes to actively help local landowners use currently vacant land for growing hops and barley, thereby benefitting the entire community.  Between an entertaining tour, friendly service behind the bar, some delicious jalapeno jam to top off our cheese and crackers, and tasty beer, a visit to the Argyle Brewing Company was a great way to end our day.

Watch the video below to see our experience on the bus for the day:

This blog was written by PureAdk. Constantly inspired by the endless beauty of the Adirondack Park, we are always discovering new facets of the Park that motivate us to get out and explore it. As we continue to adventure throughout the mountains, we have designed a website called Pure Adirondacks (PureADK.com) to share our personal stories, laughs, and experiences and put a personal touch on making the most of the Adirondacks.  By documenting our discoveries through photos, videos, and personalized posts, we hope that PureADK will not only act as an educational and informational resource, but also as an entertaining way to get a unique view on all that the Adirondack Park has to offer.