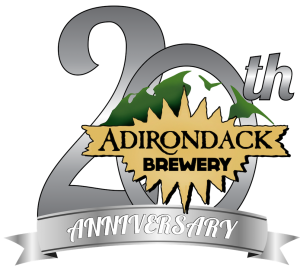 Congratulations to Adirondack Pub & Brewery on their 20th anniversary!

Through the years Adirondack Pub & Brewery has crafted tasty, innovative brews and added to its business.

Read more about their journey in the press release below:

LAKE GEORGE, N.Y. — Since opening the doors in 1999 the Adirondack Brewery has been producing award-winning and approachable craft beers in the Adirondacks. This included crafting hazy IPA style beers long before it became the norm in the industry. Over the past 20 years the craft beer, and craft beverage, industry has seen dramatic changes with the rise in craft beer sales and the drastic increase in the number of breweries, not only nationwide, but within New York, which is now well over 400 breweries.

“We’ve really been in it from the beginning here in New York,” said John Carr, founder & owner of the Adirondack Brewery. “While craft beer is still only around 13% of total beers sold, it’s becoming more and more competitive in the marketplace, and that’s why we need to continue to innovate.”

This pursuit of innovation has led to John Carr also opening the Moose Tooth Grill, a family-style restaurant with indoor thunderstorms, a player piano, and a number of animatronic critters, and Wagar’s Soda Fountain, a classic ice cream and candy shop located next to the Moose Tooth Grill, both in downtown Lake George. Also this past fall the opening of the long-anticipated High Peaks Distilling located on the same campus as the brewery, which produces award-winning whisky & bourbon utilizing a Scottish-style copper pot still.

“The distillery has been something that we’ve been planning for over 10 years,” John Carr explained. “After many trips to Scotland to visit different areas of the country where they produce Scotch, I decided that we could take our many years of malt knowledge and then take the next step and make a high-end, world-class single malt whisky. Best of all, we’re able to have full quality control of our spirits since we distill & bottle our products 100% in house.”

Cloudsplitter Single Malt Whisky was released in the fall of 2018 and has received critical acclaim and numerous awards. This first release was shortly followed by Night Spirit Straight Bourbon and Sugar Moon Maple Whiskey, which has won multiple awards of its own.

However, the innovating didn’t stop there. Looking at the entire craft beer and beverage industry, John Carr decided that they needed to start producing different types of beverages to meet people’s dietary needs.

“This started with our Lake George Cider Project, which was launched in 2017, as we saw an increase in sales and interest in the hard cider. Then just recently we’ve released a hard seltzer, making us one of the first breweries in the State to do this. Both of these products are gluten-free and as we’ve seen in the market, both cider and hard seltzers sales are growing very quickly.”

The brewery is also working on gluten-reduced versions of some of their most popular offerings, such as the World Beer Cup award-winning Bobcat Pilsner.

It’s been this view of the future and current trends that has helped the Adirondack Brewery continue to be one of the most popular breweries in the Capital Region, and there is more planned for the future. In September of this year, the brewery is planning at 20th Anniversary Party to thank all those that have supported the business and to show them what’s to come in the future.

Adirondack Pub & Brewery is a Micro Brewery located in the heart of Lake George Village, with all of its craft beer and soda brewed, bottled, and canned on-premises, using the finest malt, hops, yeast, and water since 1999. The Adirondack Pub, a full-service Adirondack themed dining establishment serves up all-American cuisine, in a rustic and family-friendly environment. The Pub is currently open seven days a week starting at noon  and offers Brewery tours Tuesdays and Fridays at 5pm and Saturdays at 11:30am. Visit Adirondack Pub & Brewery at 33 Canada Street in Lake George, NY. For more information on the brewery and beer, please visit adkbrewery.com.